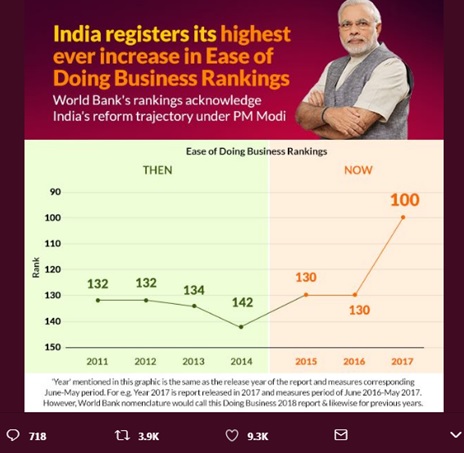 India climbing 30 places in ‘Doing Business' rankings as reported by Indian media houses and publicized by the BJP sounds spectacular except that the World Bank discourages previous year comparisons.

The World Bank explained the rank is relative to the performance of other countries and that the agency overhauled its methodology between 2013 to 2015.

The World Bank instead suggested focusing on ‘Distance To Frontier (DTF)’ scores. While governments and international investors are focused on the overall Doing Business ranking, the 'Distance to Frontier' is a more relevant indicator of conditions faced by domestic small and medium enterprises (SMEs).

Ease of doing business ranking can show only how much a country's regulatory environment has changed relative to that in other economies.

While distance to frontier score shows how much the regulatory environment for local entrepreneurs in an economy has changed over time in absolute terms.

“DB rankings are not comparable over time due to methodology revisions. During 2013-2015, in fact, DB methodology underwent a major overhaul."

The rankings are relative, subject to performance of other countries

“For comparable data, we recommend that you use the 'distance to frontier' (DTF) scores, which are an absolute measure of progress by a country. The rankings, on the other hand, are relative, and hence subject to reform actions taken by other countries.”

DTF scores show how an economy has improved over the years in absolute terms. DTF was introduced only in Doing Business 2015.

The distance to frontier (DTF) measure shows the distance of each economy to the “frontier,” which represents the best performance observed on each of the indicators across all economies in the Doing Business sample since 2005. The score is out of 100 with 0 representing the lowest performance and 100 the frontier.

Based on its DTF score how has India fared in DB 2018? 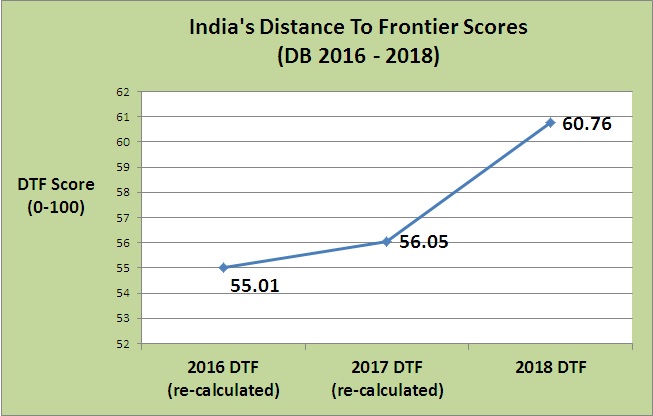 India was listed by the World Bank as one of the top 'improvers' this year with having implementing reforms in 8 out of 10 areas in a single year.

India’s performance over past 15 years is also commendable for implementing 37 reforms, the highest in South Asia. Sri Lanka follows with 22 reforms and Pakistan with 19.

How did India perform in each of the parameters?

We see that India’s performance has improved the most in ‘Paying Taxes’ followed by ‘Getting Credit’.

However, certain indicators have not shown much progress since two years.

DB 2018 data is not representative of the whole country

India's DB 2018 ranking is only based on Mumbai and Delhi.

Doing Business collects data only from the largest business city of an economy. However, for countries with a population above 100 million, data from the second biggest city is also included. Thus, DB 2018 data for India is from Mumbai and Delhi.

Is DB data a reflection of ground reality or only announcement of reforms?

BOOM asked the World Bank if the 8 reforms undertaken by India reflect reality on the ground.

"Four of them reflect the practices and user experiences on the ground level, three are more legal in nature, and one is about availability of information" – The World Bank

Following are the reforms undertaken in 8 areas - 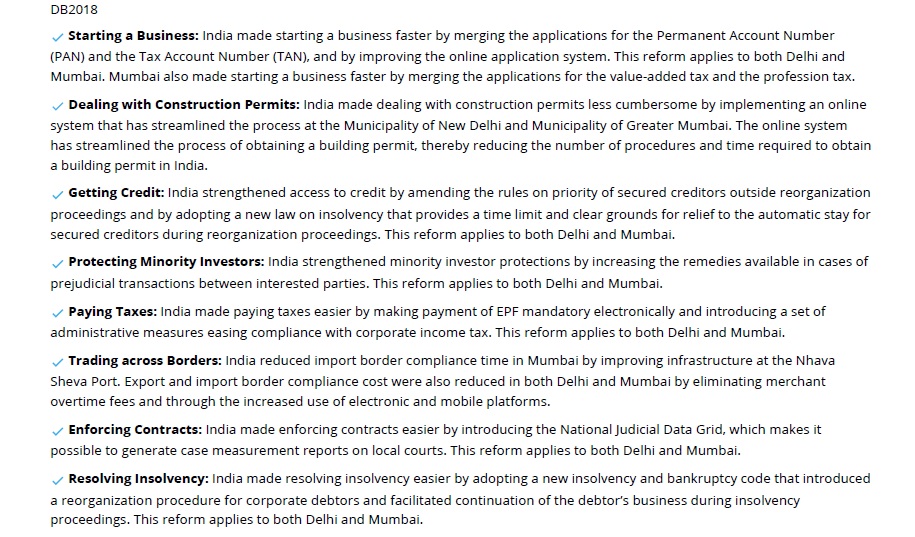 Based on World Bank's response, the reforms in the 8 areas can be classified as follows for their impact.

How does the World Bank measure ease of doing business in a country?

The data are sourced from laws and regulations of countries, expert respondents, governments and World Bank regional staff.

Data are collected through questionnaires, conference calls, written correspondence and visits by the World Bank team.

Almost, two third of the data for DB indicators are sourced by reading of relevant law and regulations forms. The report incorporates responses from around 13,000 professionals across 190 countries.

BJP business Delhi Distance to Frontier doing business Doing Business ranking featured India Mumbai World Bank
If you value our work, we have an ask: Our journalists work with TruthSeekers like you to publish fact-checks, explainers, ground reports and media literacy content. Much of this work involves using investigative methods and forensic tools. Our work is resource-intensive, and we rely on our readers to fund our work. Support us so we can continue our work of decluttering the information landscape. BECOME A MEMBER
📧 Subscribe to our newsletter here. 📣You can also follow us on Twitter, Facebook, Instagram, Youtube, Linkedin and Google News 📝Stay updated with all our latest fact check stories.