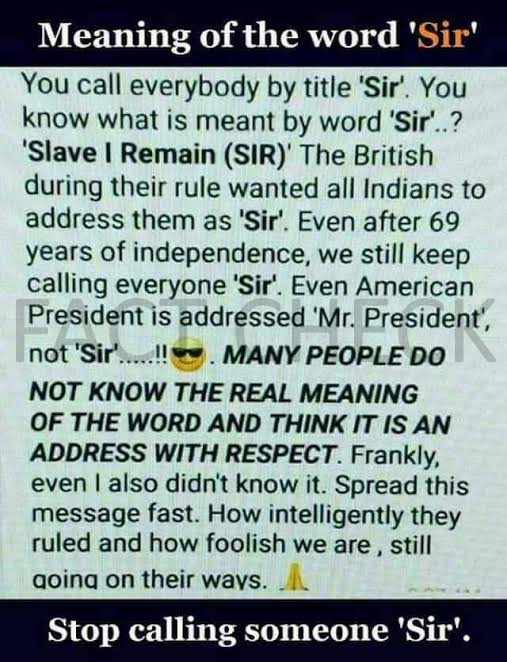 Does the English word 'sir' really stand for 'slave I remain'? And did the British, during their rule in India, want all Indians to address them as 'sir' because of this? A viral WhatsApp message has made this outrageous claim. BOOM decided to find out if the message reveals a colonial conspiracy or if it is a hoax.

A Google search for the etymology or origin of the word 'sir', shows that it is a shortened form of the Old English word 'sire' and not an acronym.

('Sire' in this context would mean a respectful form of address for someone of a high social status, particularly a king. An archaic term rarely used anymore.) 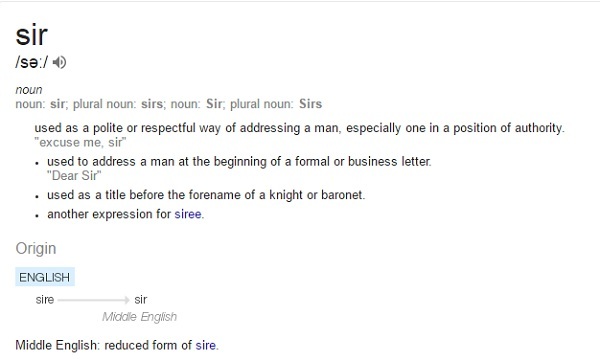 The search engine even has a graph that shows usage of the word 'sir' has declined since the 18th century.

A search on etymonline.com that provides the etymology of words also shows a similar description

sir: c. 1300, title of honor of a knight or baronet (until 17c. also a title of priests), variant of sire, originally used only in unstressed position. Generalized as a respectful form of address by mid-14c.; used as a salutation at the beginning of letters from early 15c.

The word 'sir' was first used around the 13th century, according to Merriam Webster's site. (publishers of The Merriam-Webster Dictionary) The 13th century marker establishes that 'sir' has been in existence several centuries before India was colonized. 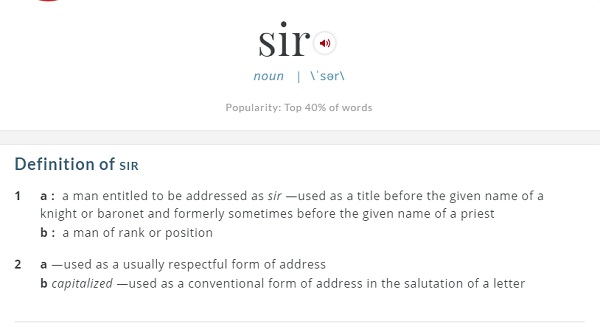 Sir is also used as a formal prefix (i.e. before the give name) of a knight or a baronet according to the British honours system, that still exists in the United Kingdom. (for example, Sir David Attenborough, Sir Anthony Hopkins)

One of the idiosyncrasies of Indian English is that we sometimes use 'sir' as a suffix (i.e. followed by a name), for example for teachers and professors.

The WhatsApp forward says that while Amercians address their president as 'Mr. President', Indians do not. One of the reasons for this could be our sociocultural norms dictate that we do not address our elders with their last name out of respect.

BOOM found no credible source that links the word sir to 'slave I remain'. However, a blog by freelance journalist and writer Udaylal Pai, makes that claim. Pai says sir means 'slave I remain', in French.

But etymonline shows that sire in its noun form has always meant some variation of feudal lord.

"sire (n.) c. 1200, title placed before a name and denoting knighthood, from Old French sire "lord (appellation), sire, my lord," from Vulgar Latin *seior, from Latin senior "older, elder" (see senior (adj.)). Standing alone and meaning "your majesty" it is attested from early 13c. General sense of "important elderly man" is from mid-14c.; that of "father, male parent" is from mid-13c."