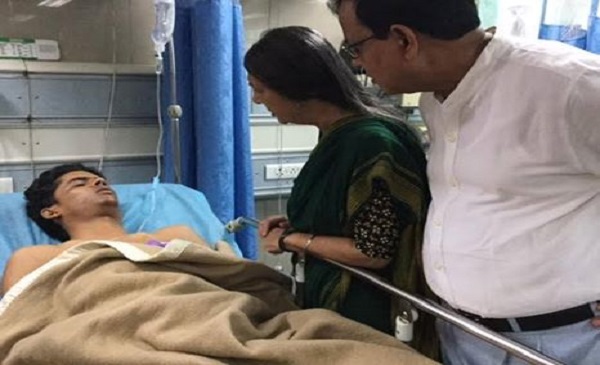 What was the cause of the fight that led to 16-year old Junaid’s death on a train to Mathura?

A question that seems to have become more important in an effort to dismiss the case as a fight between two groups of people on a crowded train.

Ever since the incident was first reported on Friday, it was initially not clear if the fight between the two groups had become violent after the victims were taunted for being ‘beef eaters’.

Several Twitteratis were quick to attack news reports that cited ‘beef’ as the cause of the attack on Junaid and his brothers.

Hindi media should be banned pic.twitter.com/jPUR1lNNOu

But who better than the accused himself to admit that he was not just drunk but was provoked by his friends. He claims that his friends after fighting over seats accused the boys of being ‘beef eaters’ – an act that provoked him to stab Junaid. He now regrets his violent act.

Regret it,was drunk,but I dint make the beef taunts or attack the victim,my friends did: One of the accused in Palwal lynching case #Haryana pic.twitter.com/438DiY2Br3

But the response of the law enforcement officials to this killing suggests that they were keen on damage control. Media reports quoting various officials oscillated between ‘argument over seat’ and ‘beef’.

Look at the different ways how various publications reported the story:

Junaid and his brother Hashim along with two friends Shakir and Mohsin had boarded the train to Ballabgarh in Haryana after shopping at Sadar bazar, Delhi. Hashim (victim and brother of the deceased) said that 15-20 people who boarded the train from Okhla created trouble, asking them to vacate their seats. The men allegedly used words such as ‘anti-national’, ‘beef-eater’ and also threw the skull caps of the boys on the floor.

The Times of India reported that Haryana DGP B S Sandhu denied that the incident was the outcome of an argument over beef. "This was a clash between two groups which resulted in the death of one person. We have already arrested one of the accused. Police teams are investigating and others too will be arrested,” he told TOI.

Speaking to CNN News18, Shakir said that none of the other passengers came to their rescue and that no policemen were present when they finally left the train. “A friend called an ambulance. We had to wait for an hour.”

And clearly the apathy of the SHO of GRP at Ballabgarh railway station, Surat Pal could be seen by how he described the killing.

‘One of them, Mohsin, called an ambulance when his brother was stabbed. Such things happen. Whenever there is a riot or fight, such things happen and people say some communal things but we can't do anything," said Pal quite nonchalantly. "The fight took place over seats. We are trying to identify the other accused.’

But speaking to reporters post the arrest, the Haryana police admit that they are investigating whether the fight went beyond fighting over seats.

"They started fighting over seats in the compartment, as is alleged in the FIR. Then there are also allegations that some words which hurt religious sentiments were said after which things got out of hand," said Kamal Deep Goyal, Superintendent of Police, Ballabgarh, reports NDTV.

Reacting to the incident, Union Minister Venkaiah Naidu said, "No one should take the law into their own hands. Even if there was a rumour, no one has the right to do this. The agencies should look into it and see who are behind this."

Not wanting to give up on an opportunity, Abhishek Singhvi of the Congress party tweeted that such incidents have been occurring only post 2014.

Shocking lynchings on mathura train. No one can xplain this as 2017 india. Why Such incidents only post 2014. Conspiracy of encouragement.

On the other hand, the mother of the deceased had a message for all - that this ‘hatred needs to stop’.

“My son was studying. He used to come home only during Ramzan. Now he is dead. His skull cap was snatched and crushed. Why this hatred against us?... We are made of the same flesh and blood. We are all one. This hatred needs to stop. What happened to my son, can happen to yours too”, said the deceased’s mother to News18.