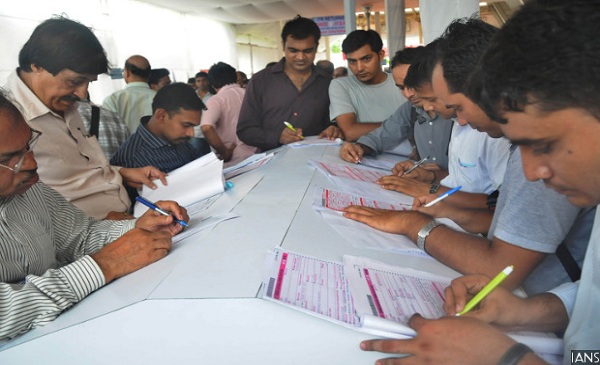 In a press release dated August 7, 2017, The Central Board of Direct Taxes claimed that there has been a ‘substantial’ increase in the number of tax returns filed this year ( April 1 – Aug 5, 2017 ) on account of demonetisation.

These first sentences from the CBDT press release are important and we will put them under a microscopic scrutiny in the next few paragraphs.

An objective, data driven assessment of the first part of the CBDT Press Release reveals some interesting findings. The below table has been pulled out from the Income-tax department website and it shows a comparative analysis of the number of e-returns filed between Financial Years 2012-13 to 2016-17. The data has been culled only for the period April 1 – August 30 for these 4 years, because that is roughly the period which concerns this latest press release issued by the CBDT.

Now lets dig even deeper into the statistics and take out from the calculations, all the tax returns filed upto August 31st, but whose due date falls on September 30th. All Corporate assesses and those non-corporate taxpayers, whose receipts are above Rs. 1 crore, have to get their accounts audited (tax audit ) and file income-tax returns by September 30.

For a moment, let us consider only those returns whose due-date falls on July 31st (All Individual assessees (mainly salaried class) and non-corporate assessees whose receipts are below Rs. 1 crore ). In this case, ITR 4, 5 & 6 which have filed from April 1 – August 31st, shall be excluded from the data. Now, in 2015, since the July 31st due date was extended till September 7, we need to consider the ITR wise data as of September 7, 2015.

The second statistical assertion in the CBDT press release is also inaccurate. The CBDT claims in its press release of August 7, 2017 that the rise in % of tax returns this year is 25% whereas for the same period in 2016, the % rise was only 9.9%. This is absolutely incorrect.

To prove our above point, we need to look no further than the CBDT’s Press Release issued last year on August 8, 2016. These are the sentences culled out AS IS from that press release.

The CBDT itself in its press release last year admitted that the periods are not comparable. Thankfully the CBDT did not compare the no. of returns filed between April 1 – August 5 for both 2015 and 2016. Had they done that, not only would it be incomparable ( since due date in 2015 was extended till September 7 ) but would have shown a 200% rise in no. of tax returns filed in 2016!! That would have been muddled the picture even more.

Now lets turn to another claim in the press release.

This one is a little more difficult to prove/disprove, for a simple reason that there isn’t comparable data available on the personal advance tax collections for April – August 5, 2016 or even for Q1 of 2016-17. At least we couldn’t find. But there is data available on personal income tax collections (self-assessment tax) for 2016, albeit for the period April – June 30, 2016. The CBDT Press Release dated July 8, 2016 shows even last year in Q1, the gross personal income tax collection growth was around 30% while the growth in net collection (after adjusting for refunds) was 48.75%. So a 34.2% increase in personal tax collections this year, is par for the course and in line with the previous year’s growth percentages.

Now to a point which is highly arguable. But this is actually to the credit of tax department. Rather than giving oversized credit to the Nov. 8 demonetisation for the increase in tax collections, the CBDT ought to have patted its own back, for their relentless pursuit of tax evaders. In July 2016 ( 4 months before demonetisation ), while the Income Declaration Scheme (IDS) was still on, the CBDT first sent an internal memo to its Officers and then followed it up with a high impact press statement/release, that essentially upped the ante on those evading taxes. The crux of the July 2016 CBDT Statement/internal directive :

2) On July 21, 2016 the CBDT issued a press release under the heading – “ IT Dept. to issue 7 lakh letters seeking information in respect of High Value Transactions.” The operative part of the press release reads thus – “ The Income Tax Department has with the help of in-house computer techniques, grouped such non-PAN transactions and identified 7 lakh high-risk clusters having around 14 lakh non-PAN transactions which are being scrutinized by the Income Tax Department closely. The Department will be issuing letters to the parties of these transactions requesting them to provide their PAN number against these transactions.”

3) Over the last couple of years, the CBDT has been making big time use of data analytics, which it claims, has helped the IRS to compile a list of “non-filers” of income-tax returns. As per the CBDT’s Central Action Plan (its comprehensive annual strategy document) the number of non-filers revealed a dramatic rise from 22 lakhs in 2014 to a whopping 59 lakhs in 2016 (pre-demonetisation) and 67 lakhs at present.

4) What we need to know, is how many of the above 6.7 million ‘non-filers’ are now within the tax net? If CBDT anyway had zeroed in on several million potential tax evaders and almost a million high value transactions without PAN, then what additional data did they get out of demonetisation? The IT Department, as part of Operation Clean Money, launched post-demonetisation, has so far shot off 23.5 lakh notices to those persons, whose tax profiles are inconsistent with the cash deposits made by them during demonetisation period ( Nov. 8 – Dec. 31). It would be quite interesting to see how many of these 23 lakh persons are part of the 6.7 million non-filers club.

5) To shower all credit in the lap of demonetisation, for the rise in number of tax returns/ increase in tax collections, is at one level, undermining the conscious efforts of the CBDT and IT Department, to track and bring tax evaders into the tax net. Demonetisation may have been a powerful, painful nail in the coffin for many a tax evaders, but not the only nail. To use a cliché, the jury is well and truly still out.