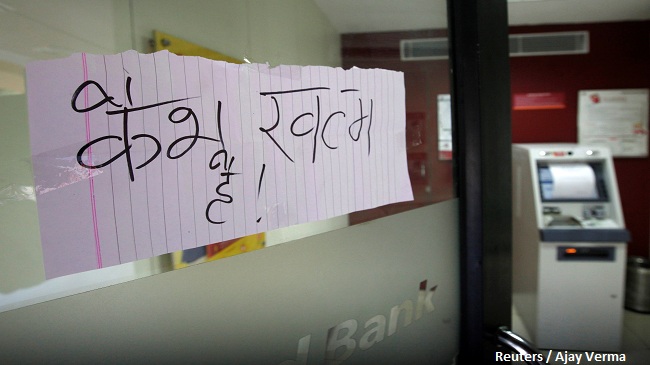 A notice is displayed on the gate of an ATM counter which is no longer dispensing cash in Chandigarh, India, November 14, 2016. The notice reads, "Out of cash". REUTERS/Ajay Verma

A senior citizen died in a stampede that broke out at a bank in Deoria district of India's northern Uttar Pradesh state on Monday (November 21) where hundreds had gathered to exchange demonetised currency notes, reports Reuters.

According to local media reports, more than 30 people have died since Prime Minister Narendra Modi's November 08 announcement to withdraw high value bank notes. Causes of deaths have been reported to be exhaustion due to standing in serpentine queues, suicide, murder and heart attack out of shock.

"There was a long queue in front of Tarkulwa state bank (State Bank of India) in which a 60 years old died. He was rushed to hospital where he was declared dead," said Senior Superintendent of Police, NK Singh.

Deceased Ramnath was in urgent need of money to pay for his daughter-in-law's treatment, who delivered a baby only two days ago.

"While entering the bank an old man of 60-65 years got injured in chaos. Later, he perhaps died on the way to hospital," said State Bank of India Manager Vijay Bahadur Singh.