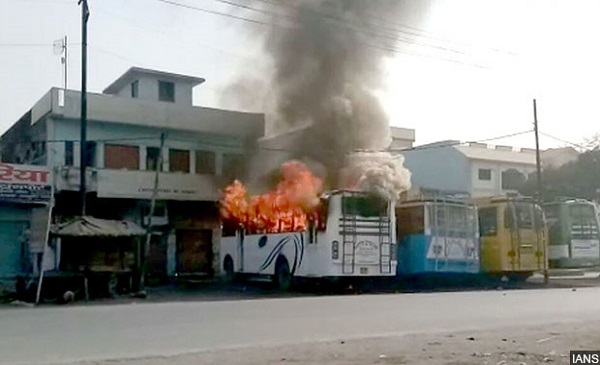 Kasganj: A bus set on fire by an irate mob as two communities clashed in Kasganj district of Uttar Pradesh on Jan 27, 2018. (Photo: IANS)

Communal violence under the National Democratic Alliance government led by the Bharatiya Janata Party increased 28% over three years to 2017–822 “incidents” were recorded that year–but it was short of the decadal high of 943 in 2008, according to an IndiaSpend analysis of home ministry data.

Uttar Pradesh (UP)–the most populous state in the country–reported most incidents (1,488) over the last decade.

Kasganj in western UP witnessed communal violence on January 26, 2018, in which a 22-year old youth–Chandan Gupta–was killed after being hit by a bullet.

As many as 44 people were arrested in connection with the violence, which erupted over an unauthorised march on Republic Day, the Indian Express reported on January 27, 2018.

India was ranked fourth in the world in 2015–after Syria, Nigeria and Iraq–for the highest social hostilities involving religion, the Huffington Post reported on April 14, 2017.

As many as 7,484 communal incidents have been reported over the last decade–between 2008 and 2017–or two every day, killing over 1,100 people, according to data released to the Lok Sabha (lower house of Parliament).

The most incidents–943–were reported, as we said, in 2008 during the United Progressive Alliance government led by the Congress, killing 167 people. The least incidents (580) were reported in 2011.

The five states accounted for 64% of communal incidents over the decade.

Western UP is considered the communal hotbed, divided on religious lines, and is home to Muzaffarnagar that witnessed communal riots in August and September 2013. These riots claimed 60 lives and more than 40,000 people were displaced.

Between 2010 and 2015, communal violence in Muzaffarnagar rose five-fold, according to data sourced from the office of the director general of police for Uttar Pradesh, reflecting a trend of tension evident across 90% of the state, IndiaSpend reported on February 28, 2017.

This article was first published on indiaspend.com.

BJP Communal Communal Violence Gujarat India Karnataka Kasganj Maharashtra Muzaffarnagar riot UP UPA Uttar Pradesh
If you value our work, we have an ask: Our journalists work with TruthSeekers like you to publish fact-checks, explainers, ground reports and media literacy content. Much of this work involves using investigative methods and forensic tools. Our work is resource-intensive, and we rely on our readers to fund our work. Support us so we can continue our work of decluttering the information landscape. BECOME A MEMBER
📧 Subscribe to our newsletter here. 📣You can also follow us on Twitter, Facebook, Instagram, Youtube, Linkedin and Google News 📝Stay updated with all our latest fact check stories.