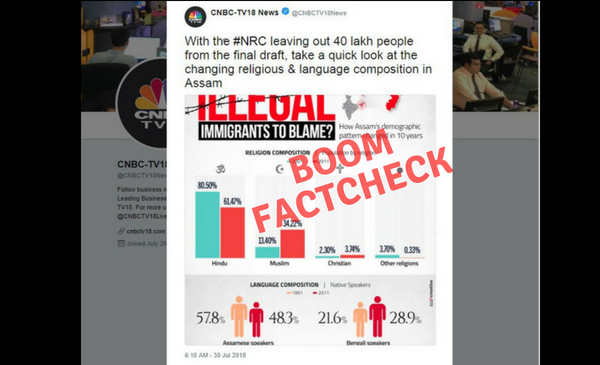 With the release of the final draft of the National Register of Citizens (NRC) for Assam on July 30, several claims have emerged on illegal immigrants and the Muslim population in the state. The list has left out around 40 lakh people from the 3.29 crore applications.

The release of NRC aims at distinguishing Indian citizens - people who resided in Assam before 1971- and illegal immigrants. The issue of illegal migration from East Pakistan, now Bangladesh, after the war in 1972 has been a major issue in Assam.

There are also arguments regarding the change in the state's religious and linguistic landscape owing to the influx of immigrants.

CNBC-TV18 News Twitter handle on July 30, 2018 tweeted an erroneous graph which seemed to support the common perception that illegal immigration from the Muslim dominated Bangladesh has led to a rapid increase of the Muslim population against the Hindu population, thus altering the demography of Assam.

The graph with the title, 'Illegal Immigrants to blame? - How Assam's demography patterns changed in 10 years' plotted the change in composition of Assam's population between 2001 to 2011. Citing census data, the graph claimed that Assam's Hindu population saw a decline from 80.5% to 61.47% and the Muslim population increased from 13.4% to 34.2% over the decade, an approximate change of 20 percentage points in both the cases. Click here for the archived version of the tweet. 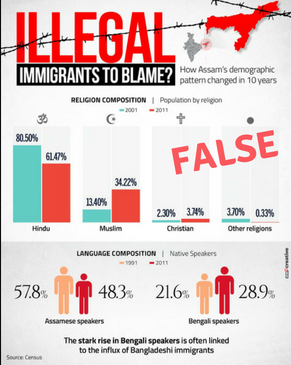 With the #NRC leaving out 40 lakh people from the final draft, take a quick look at the changing religious & language composition in Assam pic.twitter.com/AvDgK9p7QG

BOOM along with other Twitter users pointed out the error after which CNBC-TV18 tweeted that it was an error as the 2001 data used in the graph was the all India figure. The business news channel deleted the initial tweet as well.

The 2011 data for Assam has been erroneously compared with the 2001 data for all-India. We deeply regret the error & we will put out a revised graphic shortly

Twitter users including journalist Kanchan Gupta used the graph to claim that illegal immigration has led to the rapid increase in Muslim population against decrease in Hindu population in Assam.

In #Assam, Hindu population has declined by a quarter while Muslim population has nearly trebled. Entirely on account of illegal immigration from #Bangladesh while Government of #India chose slumber over action. Force GoI to do #NRC for entire country. Make #BJP walk the talk. https://t.co/m8YlS7ljyG

While the Hindu Population has declined the Muslim Population has tripled #AssamNRC must be implemented across all states in India @narendramodi #NRC pic.twitter.com/7xYRgjvhHf

What proportion of Assam's population composes of Hindu & Muslim communities

CNBC-TV18 later issued a correction with a different graph. This time the graph did not include the composition of Assam's population but it pitched the rate of increase of the Hindu and Muslim populations against the total population.

However, it is not clear from the data if illegal migrants have contributed to the higher growth rate of Muslim population between 2001 to 2011. A more detailed analysis of the religious composition of the 40 lakh people left out of the NRC is likely to provide more insight into the links between illegal migration and the change in demography.

Assam Bangaldeshi immigrants Bangladesh CNBC demography featured Hindu immigrants India Muslim NRC
If you value our work, we have an ask: Our journalists work with TruthSeekers like you to publish fact-checks, explainers, ground reports and media literacy content. Much of this work involves using investigative methods and forensic tools. Our work is resource-intensive, and we rely on our readers to fund our work. Support us so we can continue our work of decluttering the information landscape. BECOME A MEMBER
📧 Subscribe to our newsletter here. 📣You can also follow us on Twitter, Facebook, Instagram, Youtube, Linkedin and Google News 📝Stay updated with all our latest fact check stories.