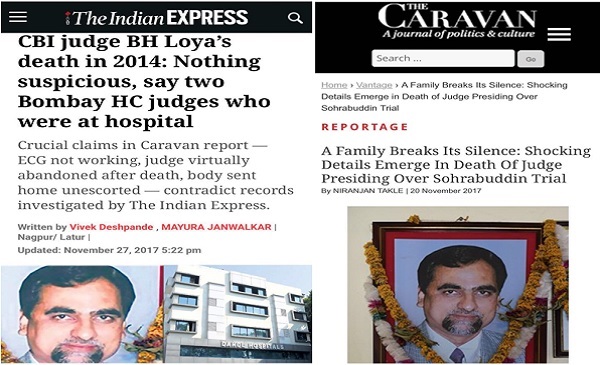 The mystery over Judge Brijmohan Loya's death in 2014 deepens after The Indian Express filed a follow-up report countering several claims made by The Caravan magazine on November 20, 2017. The Caravan had filed a report based on claims by Judge Loya's sister Anuradha Biyani, alleging foul play in his death and a cover-up led by fellow judges and local authorities in Nagpur. Judge Loya was hearing the controversial Sohrabuddin encounter case in which BJP President Amit Shah was one of the accused. The Indian Express spoke to the judges who accompanied Judge Loya to Nagpur for a colleague's daughter's wedding on November 30, 2014, who claimed that "there was nothing about the circumstances of the death to raise any suspicion."

But does the Indian Express answer all the key questions that were raised by The Caravan magazine about Judge Loya's death. We piece together the claims and counter claims made by Caravan, Indian Express and NDTV.

1) When exactly did Judge Loya die?

Niranjan Takle's report in The Caravan quotes the family saying that the two judges accompanying Judge Loya told them that he experienced chest pain at 12:30 am and was moved to Dande Hospital in an autorickshaw. This statement was made by the judges to the family "after one or one and a half month after Loya's death". This has led the family to dispute the time of the death as claimed in the post-mortem report. The report mentioned that Loya died at 6:15 am on 1st December, 2014 but the family members say that they started receiving calls about his death from 5 am onwards.

The Indian Express report quotes Judge Bhushan Gavai who was with Loya that night. Gavai says Loya experienced a health problem around 4 am and he was taken to the Dande Hospital (3 km from the guest house). Gavai disputes Caravan's claim that Loya was taken in a rickshaw and says that Vijay Kumar Barde, a local judge and Rupesh Rathi, the then Deputy Registrar of the Nagpur bench of the High Court took Loya to Dande Hospital in Barde's car.

2) Was an ECG conducted on Judge Loya?

The report has quoted Anuradha Biyani, Loya's sister who said that she "later learnt that the ECG was not working". It is not clear who gave this information to Biyani or whether Caravan's reporter Niranjan Takle sought the ECG report from Dande Hospital or not.

Here is where the story gets interesting. The Express writes that contrary to The Caravan's claims, an ECG was indeed done at Dande Hospital. The paper also produced the copy of the ECG report.

But, a careful look at the bottom of the ECG report shows the date of the report 30th November, 2014 and time recorded as 5:11 am- a good 24 hours earlier than their own claims of Loya experiencing pain and passing away post 5 am on 1st December, 2014. 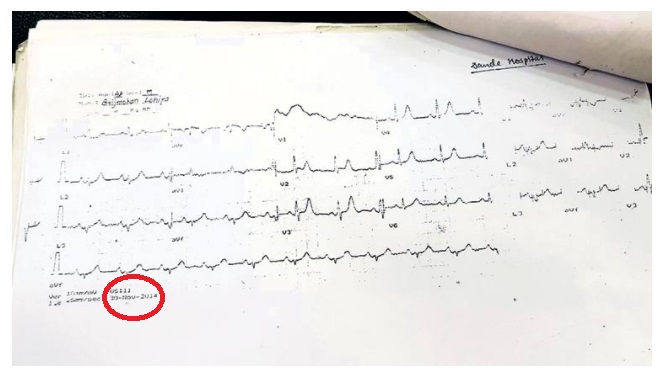 Screenshot of the ECG report of Justice Loya at Dande Hospital in Nagpur.

While The Indian Express did not explain how this could have happened in their first report, they have updated the story later in the day. They have quoted Pinak Dande, Director of Dande Hospital who said the date November 30 appearing on the ECG may have been due to a technical glitch arising out of a machine calibration issue. They stand by the fact that the ECG was taken at their hospital on December 1.

The family questions the haste shown in doing the post-mortem without informing them. Loya's sister who saw the body found it in a suspicious state with "bloodstains on the clothes", "blood on the neck", "blood and an injury on his head... on the backside", "his shirt had blood spots". This led to Biyani asking for a second post-mortem, but Loya's friends and colleagues discouraged them, "telling them not to complicate the issue more".

The report gives a sequence of events and reasons on why the post-mortem was immediately conducted. The doctors at Dande Hospital realised that Loya needed specialised cardiac treatment which the hospital could not provide. He was then taken to Meditrina hospital.

Loya had collapsed on the way to the hospital and despite conducting cardiopulmonary resuscitation and emergency treatment of DC shocks, Loya couldn't be revived. By then several judges including the then Chief Justice of Bombay High Court Mohit Shah arrived at the hospital.

It is at this stage, says Indian Express that the decision was taken to conduct a post-mortem by the seven to eight judges who had gathered at the hospital. Accordingly, a senior police official was called from the Sitabuldi police station for a panchnama, reported The Indian Express.

NDTV who also did a follow-up of the story say that the Dean of Nagpur's Government College Hospital, which performed the post-mortem said that the procedure had been referred by Meditrina Hospital.

Indian Express has also quoted a senior government forensic expert who says that "blood is bound to spill out during post-mortem and if small gaps remain in the sutures, blood might seep out". But doctors BOOM spoke to find that strange. Also, a post mortem is conducted on the body after taking off the clothes so it is surprising that blood stains were found on the clothes.

Either ways, Indian Express has not addressed the important point raised by Loya's sister of his head having injuries and blood stains. A post-mortem does not involve making any cuts on the head.

4) Who is Prashant Rathi?

Both reports have claimed to have spoken to Dr Prashant Rathi, the mysterious paternal cousin who signed on the report and received the body. Speaking to NDTV, Rathi claims that his uncle in Aurangabad is a cousin of Judge Loya who informed him about the death of Judge Loya at around 6 am. He claims "he immediately reached to help the family in the time of grief."

But it is strange that Loya's father has no knowledge of Dr Prashant Rathi despite his claim of being a relative. This raises the question why did he offer to sign on the post-mortem report if he was not related to the family at all?

An important piece of evidence in any case of suspicious death is the mobile phone owned by the person. Judge Loya's sister in her interview to The Caravan mentions that despite looking for the phone, she only got it back on the third or the fourth day from a man named Ishwar Baheti, who was not known to the family till then. She claims when the phone was returned to her, all messages were deleted including an SMS that Loya had received a few days back which read,"‘Sir, stay safe from these people".

While it is difficult to arrive at any conclusions based on the reports filed by both the publications, it is clear that there are more questions than answers. Judge Loya was a senior member of the judiciary and it is only fair that any allegations of foul play over his death should be addressed and investigated, either by the government or by the Supreme Court who have taken suo moto action in other cases in the past. More so, when Loya's family has accused former Chief Justice Mohit Shah of trying to bribe Loya with Rs 100 cr to provide a favourable verdict for Amit Shah in the Sohrabuddin encounter case.

Amit Shah BJP featured Judge B H Loya Sohrabuddin encounter The Caravan The Indian Express
If you value our work, we have an ask: Our journalists work with TruthSeekers like you to publish fact-checks, explainers, ground reports and media literacy content. Much of this work involves using investigative methods and forensic tools. Our work is resource-intensive, and we rely on our readers to fund our work. Support us so we can continue our work of decluttering the information landscape. BECOME A MEMBER
📧 Subscribe to our newsletter here. 📣You can also follow us on Twitter, Facebook, Instagram, Youtube, Linkedin and Google News