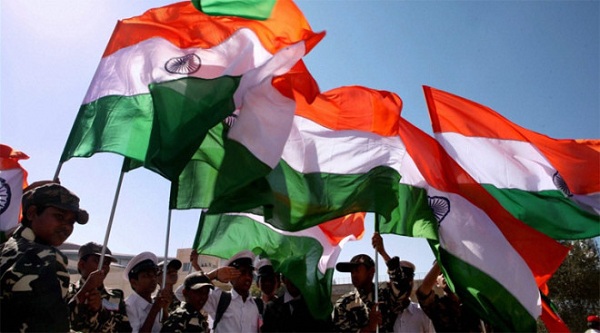 A misleading viral WhatsApp forward claims that according to the 'Prevention of Insults to National Honour Act, 1971' and the 'Flag Code of India, 2002' the tricolour should not be used as a profile picture or display picture, online. 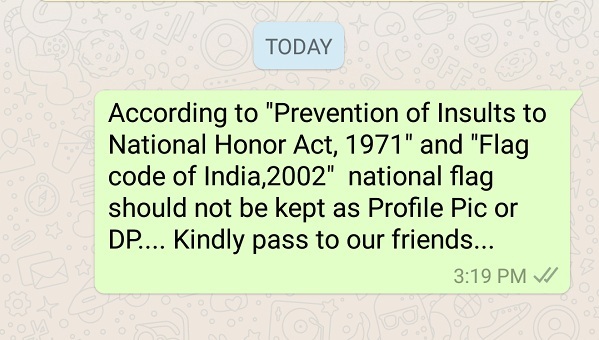 The message seems to be a new avatar of a 2014 forward - See Hindustan Times and Times of India's stories from 2014 - Flag as display photo on social media not illegal: Indore's legal fraternity

Want tricolour as display picture online? Nothing illegal about it

WHAT THE LAW SAYS ABOUT THE NATIONAL FLAG:

The national flag is regulated by the Emblems and Names (Prevention of Improper Use) Act, 1950; the Prevention of Insults to National Honour Act, 1971; and Flag Code - India.

The Flag Code of India, 2002 which came into effect from January 26th, 2002 superseded The Flag Code – India as it existed.

The Flag Code of India, 2002 is a compilation of the laws, conventions, instructions and guidance related to the display of the national flag.

Neither The Prevention of Insults to National Honour Act, 1971 nor the Flag Code of India 2002 contain specifics with regards to usage and display of the flag in digital form.

"There is no directive. The Code (Flag Code of India, 2002) was brought in when mobile internet had not yet taken off," Sanjay Hegde, Senior Advocate at the Supreme Court of India told BOOM.

HOW PRIVATE CITIZENS OBTAINED THE FREEDOM TO HOIST THE TRICOLOUR

Until 2002, private Indian citizens were forbidden to hoist the flag on days besides Independence Day and Republic Day.

In the mid 90s industrialist Naveen Jindal who had returned from the U.S. displayed the tricolour atop Jindal Strips factory in Raigarh, then a part of undivided Madhya Pradesh. A government official objected to it and threatened legal action.

In response, Jindal moved the Delhi High Court in 1995 seeking relaxation of these restrictions on free-speech grounds.

After a 7-year long legal battle, The Flag Code, India 1950 was amended after a historic and landmark decision of the Union Cabinet.

The Union Government approved the recommendations of the inter-ministerial committee and removed the restrictions on the use of the national flag by all Indian citizens from January 26, 2002.

The Supreme Court issued a final ruling in 2004 that flag-displaying is a fundamental right of all Indians.

Source: Monumental flags: How we got tricolour right

SOME DOs AND DON'Ts ABOUT USING THE FLAG ONLINE

Make sure you do not display the flag in a way that is disrespectful to the country.

There should be no inscription on the flag

The flag should not be damaged or disheveled

The flag must not be displayed with the saffron side down.

1971 Can You Use The National Flag As Your Profile Picture?: A FactCheck display picture DP Flag Code of India Indian flag profile picture The Prevention of Insults to National Honour Act
Read Full Article