A viral forward claiming that if you press the 'cancel' button twice on an Automated Teller Machine (ATM) it can prevent someone from stealing your PIN number, is false.

The message, which has been shared on WhatsApp, Facebook and Twitter, claims it is an advisory from the Reserve Bank of India (RBI) and further advises people to make it a habit before every transaction. 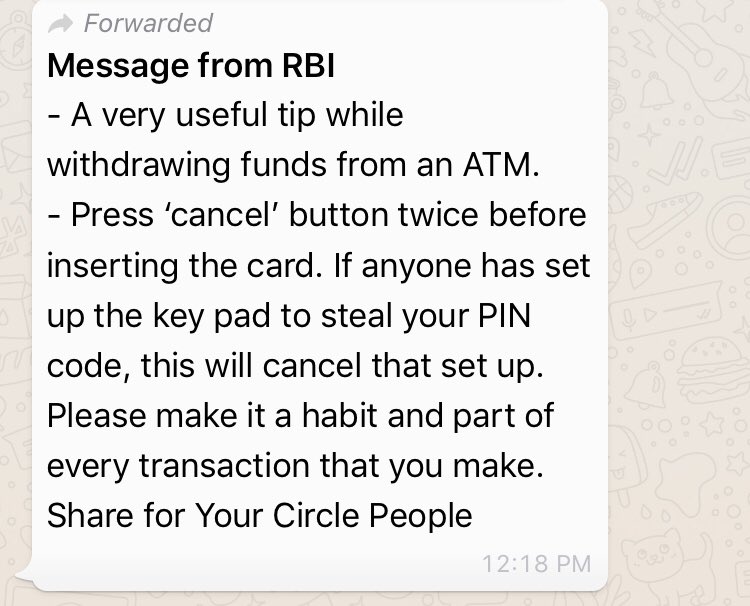 "A very useful tip while withdrawing funds from an ATM"

Press ‘cancel’ button twice before inserting the card. If anyone has set up the key pad to steal your PIN code, this will cancel that set up. Make it habit in all your transactions.

RETWEET so others can see!

A source within the RBI, who did not wish to be named, told BOOM the message was fake and confirmed that it did not come from the central bank.

BOOM also reached out to Manipal Technologies Limited, a security print products manufacturer, whose clients include the banking industry.

The message specifically mentions RBI in order to give the forward credibility. Many fake messages on social media follow the same structure of mentioning a credible authority so that the message is taken seriously. A few of the messages also include the link to the website making the fake message look more real. But the URL often leads to only the home page of the website and not to any specific page.

"No, the RBI will never get into this. This is just a rumor as RBI doesn’t get into how an ATM functions. How the ATM functions depends entirely on the Banks and the vendors who have given the ATM services want the ATM to function. RBI has no role in it," Shenoy said.

However, ATM fraud is still a common occurrence. Here are some of the ways listed by livemint that you can use to protect yourself from theft when withdrawing money from an ATM.

Claim :   Press Cancel Button Twice To Prevent PIN Theft
Claimed By :  Social Media
Fact Check :  FALSE
ATM ATM Machines Banking cancel button Cash withdrawal fake news featured PIN PIN Theft RBI
If you value our work, we have an ask: Our journalists work with TruthSeekers like you to publish fact-checks, explainers, ground reports and media literacy content. Much of this work involves using investigative methods and forensic tools. Our work is resource-intensive, and we rely on our readers to fund our work. Support us so we can continue our work of decluttering the information landscape. BECOME A MEMBER
📧 Subscribe to our newsletter here. 📣You can also follow us on Twitter, Facebook, Instagram, Youtube, Linkedin and Google News 📝Stay updated with all our latest fact check stories.