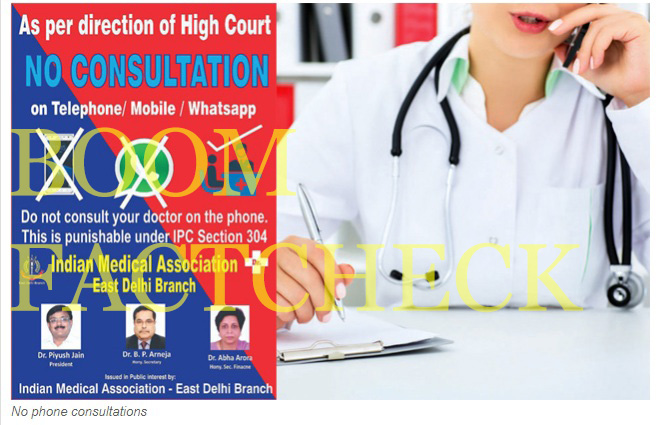 CLAIM: A viral graphic online suggests seeking medical consultation over the phone is a punishable offence.

A viral poster warning people that consulting doctors over phone or via text messaging is a punishable offence is in fact only one of two test posters created following internal discussions held by the Indian Medical Association's (IMA) East Delhi chapter.

The poster which has the IMA's name and logo is doing the rounds on WhatsApp, Facebook and Twitter. It has also been printed in newspapers and published in online editions of news articles such as this article by the Mumbai Mirror. 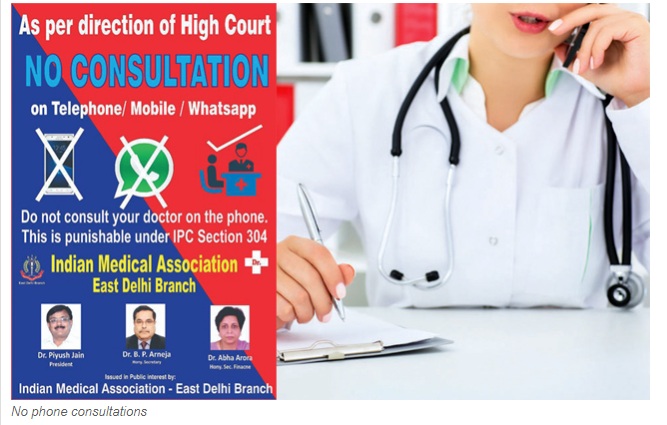 A screenshot of how the poster appears in Mumbai Mirror's August 4, 2018 story Doctors tring in the change

The poster reads, “As per directions of the High Court, no consultation on telephone, mobile or WhatsApp.” It further adds, “Do not consult your doctor on the phone. This is punishable under IPC Section 304.”

@IndianMedAssn This poster is being shared on social media. I would like to point out an error: "Do not consult your doctor over phone. This is punishable under IPC Section 304." It sends out a wrong message that patients would be punished for consulting doctors on phone/Whatsapp pic.twitter.com/gzXaOzElCI

The warning seems to have been triggered by an ongoing case being heard by the Bombay High Court where two Ratnagiri based doctors were arrested after a patient whom they prescribed medication for over the phone died days after giving birth. The court rejected the anticipatory bail pleas of the doctor couple by observing that prescribing medicines to patients without diagnosis amounted to culpable negligence.

In February 2018, a woman delivered a baby through a Cesarean operation at hospital run by Dr Sanjeev and Dr Deepa Pawaskar. The woman was discharged two days later, according to news reports. A day after being discharged, the new mother started feeling unwell and her family contacted the Pawaskars over phone. The gynecologists directed the family to go to a medical store and prescribed tablets to be given to the patient without having seen her. However, the woman's condition worsened and the following day she was rushed back to the hospital. Though the doctors were not present at the hospital they continued prescribing treatment over the phone. But, the woman's condition kept deteriorating. A day later she was moved to a new hospital where she died within hours of being shifted.

The high court's order in late July rejecting the anticipatory bail pleas of the doctors spurred the IMA's East Delhi chapter to discuss the order's significance for the medical fraternity in India.

The original poster has the photo and names of president, secretary and finance secretary of the East Delhi chapter. These names have been cropped out in some posters viral on social media. BOOM reached out to Dr Piyush Jain, president of the East Delhi chapter who said that after the Bombay HC's order, the members held an internal meeting to decide on a course of action regarding phone consultations with patients.

“In the meeting we decided to come up with warnings for patients and doctors asking them to refrain from offering consultation over phone or WhatsApp. For this purpose, we created two posters - one stating that patients will be arrested for consulting doctors and other other warning doctors. These posters were then sent out to members of the East Delhi chapter asking them for their opinion,” he explained. He added that the members were advised not to forward the poster to anybody and that he had no clue how it became viral on social media. The East Delhi chapter, is the largest chapter of the IMA with 9643 members, according to its website.

When asked why the poster suggests patients will be punished under Section 304 as the court order essentially held doctors liable for prescription without diagnosis, Dr Jain said, “Why should it only be doctors? Patients should also be given a warning. They routinely lie to us to avoid coming to the hospital and meet the doctor.”

ADVISORY ISSUED TO DOCTORS IN MAHARASTHRA

While the viral poster is not an official statement by the IMA, the association has in fact issued an advisory to all doctors in Maharashtra, asking them to “not offer consultations on phone or text and any consultations without meeting the patient first.”

BOOM contacted Dr Ravi Wankhedkar, national president, IMA who said that all doctors in Maharashtra had been told by the IMA to refrain from offering consultation without first having physically diagnosing the patient. Dr Parthiv Sanghavi, secretary, IMA explained that the advisory was currently only for doctors in Maharashtra but an official guideline would be put in place for the medical fraternity across the country.

“The matter being sub judice we cannot issue official guidelines. For now we have conveyed the same to doctors via word of mouth but will put it in the rules once the case is closed,” he said.

“The practice of offering consultations on text or call without diagnosing the patient is not right. It is highly risky to prescribe medicines based on how the patients or their family members describe symptoms,” Dr Sanghavi said. He added that while the viral poster was not its official statement, IMA would put in place guidelines that all doctors would have to follow.

WHAT THE COURT ORDER SAID

The court while rejecting the anticipatory bail application of the two gynecologists - Dr Deepa Pawaskar and Dr Sanjeev Pawaskar stated, “An error in diagnosis could be negligence and covered under Section 304A of the Indian Penal Code. But this is a case of prescription without diagnosis and therefore, culpable negligence.” The court also added that the above observation, “are restricted” to the anticipatory bail application of the doctors and that “the same shall not be taken into consideration in any other proceedings.”

(Note that the case is ongoing.)