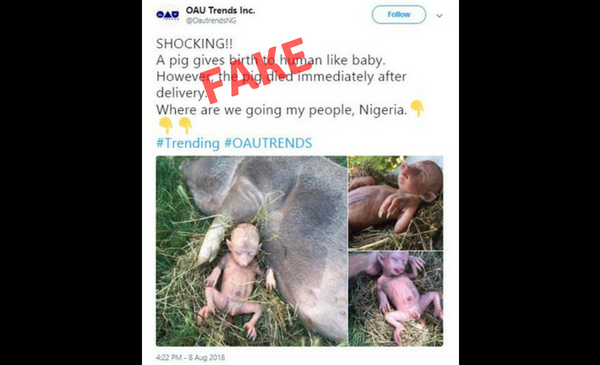 Images of a bizarre looking creature which looks like a mix of a pig and a human have been going around on social media for quite some time now. The claim going around with these images is that a pig died after giving birth to a human like baby.

A pig delivered a baby with mixed features of man and pig yesterday at siddipet district.. pic.twitter.com/xtnv80PygE

A YouTube video with a voiceover in Marathi claims that a man had sex with a pig and the weird looking creature is its offspring. The video further claims the incident took place in South Africa.

A pig gives birth to human like baby. However, the pig died immediately after delivery.

Not only this but there were other images of one more such sculpture going around earlier this year claiming it to be found in Kerala and that it was a new form of life which existed thousand of years ago.

In Kerala, found a new form of life which researchers say it existed about thousand years ago. It is found that the cells of the aliens do not match with the human cells. The aliens do not eat what humans eat. They consume their food using the sunlight as believes. pic.twitter.com/1h9bdtfjvq

Factchecker Check4Spam tweeted that the same hoax is going around in Switzerland as well and is circulating in French.

The Pig Gave Birth to Human Baby hoax has hit #Switzerland. A post is circulating in #French !

Both these creatures are actually a figment of someone's imagination. Artist Laira Maganuco from Italy is the creator of both the sculptures. She not only makes such sculptures but also sells them online. We found her Facebook profile which clearly mentions that these were not real life creatures but art works made of silicon.

BOOM reached out to the artist and will update its story upon hearing back from her.

So called human-pigs and other bizarre creatures are staple for social media. In 2015, photos of a "fallen angel" went viral on the Internet. This turned out to be an art installation from 2008 by Beijing artists Sun Yuan & Peng Yu for their work titled 'Angel'. (Read more about it here) Photos of the art work went viral only in 2015 all over social media which resulted in many worrying about the end of the world. It was also compared to the discovery of a similar Earth also orbiting a sun-like star some 1,400 light years away.