BOOM is an independent digital journalism initiative with a mission to fight misinformation and make the internet safer.

We are India’s premier fact checking website, committed to bring to our readers verified facts rather than opinion. BOOM also writes pro-active fact files which serve to educate readers on key issues they might have questions about. Subjects that BOOM actively fact checks range from political, social, communal and health & medicine to products and services and even history.

Our approach involves a whole bunch of simple technology and tools but the foundation of our work is journalism, classic, old-school and robust. We speak to people, we check and verify and do not publish until and unless we have got formal clarifications on posts or stories where individuals and orgnisations are involved.

BOOM is presently available in three languages, English, Hindi and Bengali with dedicated on ground teams working on all three. BOOM is also available in the form of a daily 20 minute television show on NDTV Hop, a 24 hours live streaming service on app. BOOM also broadcasts daily on Facebook and YouTube with live updates and checks on the latest news material being worked upon.

BOOM has been in existence since 2014 as a broad investigative journalism effort and as a full-fledged fake news busting and fact checking initiative since November 2016. BOOM is a part of Outcue Media Pvt Ltd and is based in Mumbai, India. 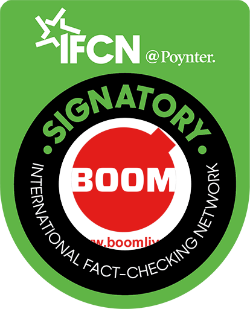 BOOM is among the first two fact checkers in India (www.factchecker.in also launched by the same founder) and South Asia to be certified by the International Fact Checking Network- Poynter Institute. This certification is a reflection of the early steps we took to build a editorially strong independent fact checking website that has strived to debunk fake news and prevent the spread of it.

Here is a link to our certification and the process. https://www.poynter.org/international-fact-checking-network-fact-checkers-code-principles

Previously, he was Founder-Editor in Chief of Bloomberg TV India, a 24-hours business news service launched out of Mumbai in 2008.  Prior to setting up Bloomberg TV India, he worked with Business Standard newspaper as Editor (New Media) with a specific mandate of integrating the newspaper’s news operations with its digital or web platform. He also spent around five years each with CNBC-TV18 & The Economic Times. He is a Fellow of The Aspen Institute, Colorado, a McNulty Prize Laureate 2018 & a winner of the BMW Foundation Responsible Leadership Awards for 2014.

Jency Jacob is the Managing Editor of BOOM and has worked with some of the top television and print networks in the country. Jency manages a newsroom of enterprising fact checkers who are striving to keep our social media and public space clear of misinformation and communally sensitive disinformation that can result in real-life implications. Jency is also a regular speaker at various national and international conferences, speaking about the importance of battling misinformation and the media's role in countering them with credible and factual news stories.

Before joining BOOM, Jency was the Senior Editor at Business Standard’s Digital vertical and played a very important role in synergising the print and web operations and scale up the newsroom’s contribution to the web between 2013 to 2016. Having started his career as a business correspondent at the national broadcaster Doordarshan, he worked on various beats covering stock markets, corporate and led reporting and desk teams as the Mumbai News Editor and National Editor across several news channels.

Karen Rebelo is the Deputy Editor of BOOM and works as an investigative reporter, factchecker and a copy-editor. Her specialisation includes spotting and debunking fake images and viral fake videos. Karen is a former Reuters wires journalist and has covered the resources sector in the UK and the Indian stock market and private equity sector. She cut her teeth as a prime-time television producer doing business news shows.

Swasti Chatterjee is a fact-checker and the Deputy News Editor of Boom’s Bangla team. She has worked in the mainstream media, in the capacity of a reporter and copy editor with The Times of India, The Indian Express and NDTV.com and is now working as a digital detective, debunking fake news.

Nivedita Niranjankumar is a fact checker at BOOM and works to stop the spread of disinformation and misinformation. When not at work, she escapes into second-hand bookstores, looking for magic or a mystery.

Sumit Usha is a fact checker and the News Editor of Boom’s Hindi wing. In the six years of his journalistic career, he has worked with the New Indian Express, Times of India and Deccan Chronicle. The dynamic nature of digital media finally made him take the leap from print to online, and don the hat of a digital detective.

Krutika Kale is BOOM’s video producer and works on stories through intelligent use of images, text and video. She is also the producer of our flagship show Fact Vs Fiction.

Anmol Alphonso is a fact-checker with BOOM. He has previously interned at IndiaSpend as a fact-checker and was a reporting intern at Times of India, Indian Express, and Mid-Day. He is a post-graduate diploma holder in journalism from St Paul’s Institute of Communication Education, Mumbai.

Archis is a fact-checker and reporter at BOOM. He has previously worked as a journalist for broadsheet newspapers and in communications for a social start-up incubator. He has a Bachelor’s Degree in Political Science from Sciences Po Paris and a Master’s in Media and Political Communication from the University of Amsterdam.

Mohammed Kudrati is a post-graduate in economics from the University of Mumbai, and enjoys working at the junction of data and policy. His specialisations include data analysis and political economy and he previously catered to the computational data analytical requirements of US-based pharmaceutical clients.

Saket Tiwari is a fact-checker and reporter at BOOM, looking actively at social media pages to track the latest trends in misinformation. He has previously interned with The Hindu and worked as a sub-editor for the broadsheet newspaper The New Indian Express. He has a Bachelor's Degree in Biotechnology from Devi Ahilya Vishwavidyalaya and a PGD in print media from the Indian Institute of Journalism and New Media, Bangalore.

Naveen Nair is Head-Operations at BOOM, overseeing production and execution of daily shows and videos. He leads a team of producers, video journalists and video editors and is responsible for developing a digital strategy and integrating it across multiple media platforms. He is a media professional with over 15 years of experience, worked in media houses such as Network 18, ESPN- Star Sports.