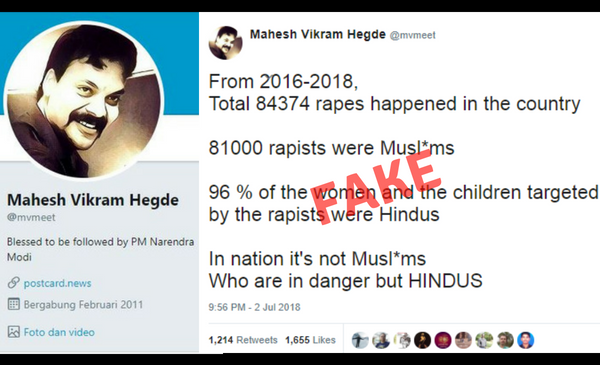 Mahesh Hegde, founder of fake news website Postcard News who was arrested by the Karnataka police in March 2018 for spreading fake news and communally sensitive stories, has now made a new claim on Twitter. Hegde claimed that 81,000 out of 84,374 i.e 96% of rape accused in the country are Muslims and 96% of the victims are Hindus in the years 2016-18. The tweet got around 1,200 retweets.

Not just Hegde, this message was shared by several others on social media citing the National Crimes Record Bureau (NCRB) as the source. Click here and here.

The message has been falsely attributed to NCRB as the bureau does not publish data on religious status of criminals or victims.

Why this claim is fake?

Thus, it is not clear where the number of 84,734 originated from.

2) NCRB's data on rape only gives number of incidents and victims, age group of victims and relation of victims to the offenders. The 2016 report or the previous ones did not have any mention of religious status of the offenders or victims of rape.

NCRB's methodology for the publication also shows that in general the data includes the principal offence, population and crime rate. Click here to access Crime in India 2016 report. 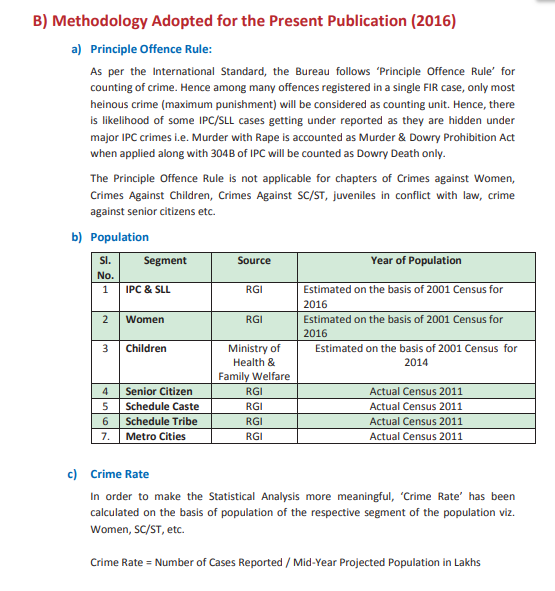 BOOM reached out to NCRB who confirmed that the bureau does not publish religion wise data and the information shared on social media is wrong.

Update: Postcard News Twitter handle has tweeted that Mahesh Hegde's handle was hacked on July 1. But it is not clear how the handle continued to tweet till July 4 without any action being taken by them.

On July 1st, the Twitter account of Mahesh Vikram Hegde (@mvmeet) was hacked and now it has been deactivated by the hackers.

This incident has been brought to the notice of Mr Mahesh Vikram Hegde and he has said that he'll take strict action against this.

This is not the first time Postcard led by its founder Mahesh Hegde has shared communally sensitive tweets to polarise its followers. Here are a few instances when they have been caught for spreading fake news.

Note: This story has been updated to include NCRB's response.