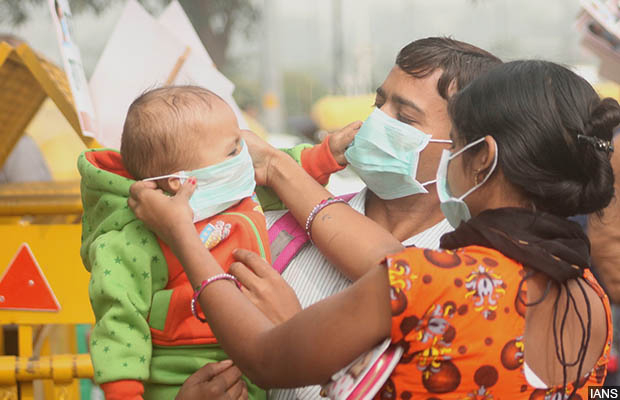 National capital Delhi has the worst air in the country, said the report, Airpocalypse, released by Greenpeace India, an advocacy.

Of India’s 280 cities/towns where air quality is monitored, none met the World Health Organization’s (WHO) safe levels of PM 10–20 μg/m³–the report said.

The Indian annual safe level for PM 10–airborne particles seven times finer than a human hair that can sicken or kill people by entering their lungs–is three times more lenient at 60 μg/m³.

To prove air pollution is not limited to Delhi, the report analysed air quality data of 280 cities with a population of 630 million–53% of the total population of the country.

Of them, 550 million–9 of every 10 Indians–live in areas exceeding the national standard for PM 10, found the report.

Similarly, every three out of 10 Indians live in areas where air pollution levels are more than twice the stipulated standards, said the report.

“Apart from this, 580 million Indians live in districts with no air quality data available,” the report said.

“Only 16% of the population inhabiting the districts (where air quality is being monitored) have real-time air quality data available,” said Sunil Dahiya, senior campaigner, Greenpeace India, and an author of the report. “This portrays how inhumanly we are responding to the national health crisis in front of us.”

Even the manual data collected for 300 cities and towns are not shared in a timely manner and in a format which can be accessed and understood easily by general public, he added.

The data used for the report was obtained from multiple sources–the National Air Monitoring Programme, Right to Information (RTI) responses from State Pollution Control Boards and annual reports, along with the websites of various state pollution bodies.

Ranking of cities based on their annual average of PM10 levels reveal that Delhi is the most polluted city at 290 μg/m3—close to five times the national standard. It is followed by Faridabad, Bhiwadi and Patna with annual averages that are 272 μg/m3, 262 μg/m3 and 261 μg/m3 respectively.

Dehradun in Uttrakhand was an unexpected entrant in the list of 10 worst cities, with an annual average of 238 μg/m3.

Most of the top polluted cities are spread across the Indo-Gangetic basin with southern cities being slightly better off, said the report. However, cities in the south also need a focused and time-bound action plan to achieve WHO standards, it added.

“The fact that less than 20% Indian cities are complying with the national, or CPCB [Central Pollution Control Board], standards sadly points to the lack of workable, robust and timely action plans so far,” said Dahiya.

Delhi’s Graded Response Action is the only available programme in India to combat pollution. It entails a number of actions to be taken as soon as the air quality plunges. These include putting a stop on garbage burning, not allowing trucks to enter the city, shutting down power plants, and closing brick kilns and stone crushers, IndiaSpendreported on December 22, 2017.

The government is planning to launch a National Clean Air Programme (NCAP) “as a medium term national level strategy to tackle the increasing air pollution problem across the country in a comprehensive manner”, according to a January 5, 2018 Lok Sabha reply .

Can the national programme be the answer?

“The NCAP focuses on collaborative and participatory approach covering all sources of pollution and coordination between relevant Central Ministries, State Governments, local bodies and other stakeholders” said the reply.

The NCAP has not been made public yet.

The Greenpeace report has made some recommendations to make the NCAP more effective. First, it needs comprehensive, systematic and time-bound plans with fixed accountabilities. Second, it needs to be made public soon so it can draw the participation of the general public and all layers of the government.

A continuous ambient air quality monitoring mechanism across the country with real time data sharing capabilities, stricter enforcement of laws for pollution control, and incentivising use of electric vehicles are the other suggestions on air pollution control.

This article was first published on indiaspend.com