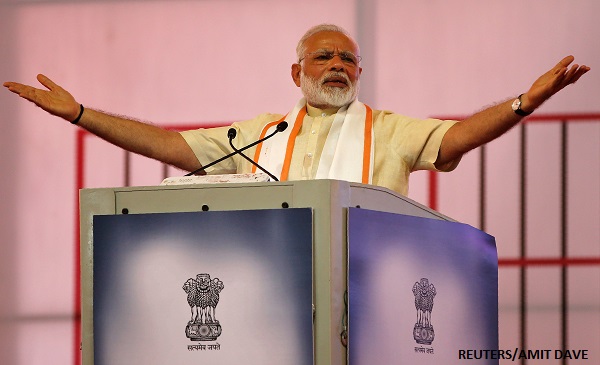 A fact check of six claims by Prime Minister Narendra Modi on November 8, 2016 and August 15, 2017 on the impact of demonetisation based on data from the Reserve Bank of India (RBI) and government data found three to be right, one wrong and two ambiguous.

“We have seen some benefits and costs for demonetisation. We have to wait for the full cycle of data to see the impact,” former RBI Governor Raghuram Rajan said during the launch of his book I Do What I Do in Mumbai on September 8, 201.7.

We have seen some benefits and costs for demonetisation, we have to wait for the full cycle of data to see the impact: Raghuram Rajan

“There are no clear answers as to whether or not it was successful as no performance parameters were set to evaluate the same,” Madan Sabnavis, chief economist at CARE Ratings, wrote in a column in The Financial Express on September 8, 2017.

The demonetisation drive was a crackdown on illegal economic activities with two stated objectives, one to curb the menace of black money and corruption and second to break down the funding modules supporting terror and anti-national activities, as stated by Modi in his address on November 8, 2016.

“Through all these efforts, in the last two and a half years, we have brought into the open nearly 1 lakh 25 thousand crore rupees of black money belonging to the corrupt. Honest citizens want this fight against corruption, black money, benami property, terrorism and counterfeiting to continue. ….To break the grip of corruption and black money, we have decided that the five hundred rupee and thousand rupee currency notes presently in use will no longer be legal tender from midnight tonight, that is 8th November 2016. This means that these notes will not be acceptable for transactions from midnight onwards. The five hundred and thousand rupee notes hoarded by anti-national and anti-social elements will become just worthless pieces of paper.”

Here’s what we found:

“But have you ever thought about how these terrorists get their money? Enemies from across the border run their operations using fake currency notes. …The five hundred and thousand rupee notes hoarded by anti-national and anti-social elements will become just worthless pieces of paper.”

Government data on counterfeiting indicate that circulation of fake currency (including new notes) continued despite demonetisation, including in the state of Jammu & Kashmir. Notes of Rs 500 and Rs 1,000 were seized from left-wing extremist groups during demonetisation. There are no data available in the public sphere that could measure the impact of demonetisation in paralysing terror funding modules post its implementation.

This indicates that counterfeiting of currency (including new notes) continued despite demonetisation.

“Terror funding has been squeezed due to demonetisation, Finance Minister Arun Jaitley said, adding that the number of stone-pelters in Jammu and Kashmir has gone down in last few months as a result of it,” Times of India (TOI) reported on August 1, 2017.

As many as 1,070 stone pelting incidents were reported between November 2016 and ending August 19, 2017, according to Jammu and Kashmir police data.

“There have been some cases where money has been used for fuelling unrest, but stone-pelting most often happens spontaneously following a security situation or allegations about human rights violations,” a top police official in Srinagar told FactChecker, as we reported on August 22, 2017.

“The squeeze of terror funding is a direct result of demonetisation. This is happening not only in the Kashmir valley, it is happening in Chhattisgarh too,” Jaitley had said.

The security forces seized high-denomination currency notes of Rs 500 and Rs 1,000 worth Rs 97.75 lakh (Rs 9,775,000) from LWE groups in Bihar, Chhattisgarh, Jharkhand and Telangana during demonetisation, according to this reply (unstarred question 1984) in the Rajya Sabha by minister of state in ministry of home affairs Hansraj Gangaram Ahir on August 2, 2017.

“As per reports of agencies, the demonetization of banknotes of Rs 500 and Rs 1000 denomination resulted in significant positive impact on most theatres of violence in the country including stone pelting incidents in J&K,” said Ahir. “Since illegally held cash forms the major chunk of terrorist funding, after the demonetization, most of the cash held with the terrorists turned worthless. Demonetization also led to instant extinguishment of Pak-printed high quality fake Indian currency notes. It also adversely affected the hawala operators.”

“We have achieved several milestones through demonetisation. The hidden black money has been brought into the formal economy.”

Fact: “There is no information on how much black money has been extinguished as a result of demonetisation of Rs 500/1,000 notes or about unaccounted cash legitimised through exchange of currency post note ban,” the RBI told a parliamentary panel, Business Standard reported on September 5, 2017.

“Based on research conducted by outside experts, about Rs 3 lakh crore that had never come into the banking system before has been brought into the system after the demonetisation,” Modi said.

This indicates that only 1% of demonetised currency did not return to the central bank.

Critics of demonetisation have said that the government failed to bring back black money.

“Demonetisation is a multi-dimensional project and cannot be assessed on the basis of one single parameter: the quantum of notes (sic) returned,” S Gurumurthy, an economist, wrote in The New Indian Express on September 5, 2017.

Undisclosed income of Rs 5,400 crore was detected by the income tax department in over 1,100 searches/surveys conducted, and more than 5,100 verification notices were issued in case of suspicious high value cash deposits, post demonetisation, between November 9, 2016 and January 10, 2017, according to this reply to the Lok Sabha (lower house of Parliament) on July 21, 2017.

The actions led to seizure of valuables amounting to over Rs 610 crore including cash worth Rs 513 crore. Seizure of cash in new currency notes was about Rs 110 crore.

“After three years, I want to tell the countrymen proudly that we have unearthed black money worth Rs. 1.25 lakh crore. The culprits would be brought to book and forced to surrender.”

Fact: Over the last three years, till February 2017, more than Rs 1.37 lakh crore of undisclosed income or tax evasion has been detected in over 23,000 searches/surveys by law enforcement agencies, according to this reply (starred question 412) to the Rajya Sabha (upper house of Parliament on April 11, 2017.

Criminal prosecutions were launched in 2,814 cases and 3,893 people arrested. In addition, the Enforcement Directorate tightened grip over anti-money laundering activities by registering 519 cases and conducting 396 searches. Arrests were made in 79 cases and properties worth Rs 14,933 crore were seized.

“Concerted and coordinated actions of law enforcement agencies have achieved phenomenal success in fighting the menace of black money during the last three years,” finance minister Arun Jaitley said in this reply to the Rajya Sabha.

The government launched ‘Operation Clean Money’ on January 31, 2017. Information on 1.33 million accounts were received through over 930,000 responses that involved cash deposits of nearly Rs 2.89 lakh crore, according to this release by the finance ministry on August 30, 2017.

About 200 high-risk groups of taxpayers were identified for action. As much as Rs 17,526 crore undisclosed income was detected and Rs 1,003 crore seized between November 2016 and May 2017.

“The government has unearthed benami properties worth over Rs 800 crore.”

Fact: As many as 413 benami transactions have been identified till June 20, 2017 since November 1, 2016 when the amended Benami Transactions (Prohibition) Amended Act, 2016 came into effect, according to this reply to the Lok Sabha on July 28, 2017.

The provisional attachment of properties under the Act was made in 233 cases with properties worth Rs 813 crore including deposits in bank accounts, jewellery and immovable properties. Note: Benami is a transaction in which the real beneficiary is not the one in whose name the property is purchased.

“Out of 3 lakh shell companies, registration of 1.75 lakh companies were cancelled.”

Fact: Registration of 209,032 shell companies have been cancelled, according to a press release by ministry of corporate affairs on September 12, 2017.

Shell/bogus companies are non-trading companies formed to use as instruments to raise funds before starting operations as a front for an illegal business.

The tax department detected more than 1,155 shell companies, used as conduits by over 22,000 beneficiaries between 2013-14 and 2015-16, according to this reply to the Rajya Sabha on August 1, 2017. Non-genuine transactions of such beneficiaries was over Rs 13,300 crore. The I-T department has filed criminal prosecution complaints against 47 people.

The Central Bureau of Investigation has registered 30 cases against 201 shell companies during three years ending February 28, 2017. Of these, 17 cases have been charge-sheeted.

“New taxpayers filing income tax returns from April 1 to August 5 is 56 lakh while in the same period last year was only 22 lakh.”

Fact: The finance ministry issued a clarification saying the PM meant e-filing of returns and not income tax returns. The complete e-filing data for 2017-18 has not yet been put out by the ministry.

The clarification issued said the number quoted by the PM in his speech was only referring to personal income tax returns from April 1 to August 5, 2017.The statement reads:

The PM’s speech did not mention e-returns.

“The number of new taxpayers filing income tax returns from April 1 to August 5 is 56 lakh while in the same period last year only 22 lakh.”

There are two classifications for individual taxpayers, individual and individual undivided hindu family, according to the website of the tax department.

An individual pays tax on his/her income, while in the undivided hindu family classification, which applies to family-owned businesses, only the income of the head of the family (karta) is taxed.

Between April 2017 and July 2017, 22 million returns were filed under ITRs 1 to 4 — up 18.6% from 18.6 million during the same period in 2016. This means 3.4 million additional returns were filed this year, 2.2 million less than the Prime minister claimed, but it is possible more people filed returns over the five extra days granted.

This story was first published on Factchecker.in