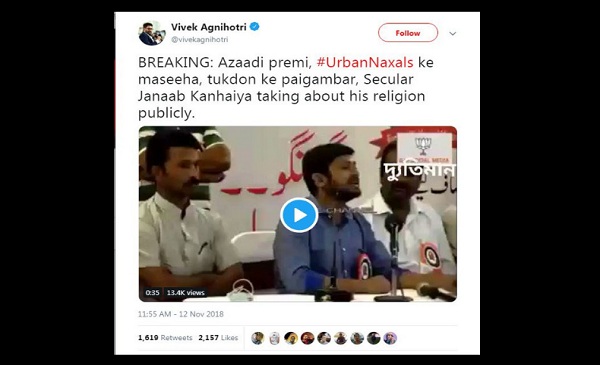 View an archived version of the tweet here. Kanhaiya Kumar appears to be saying the following in the viral clip tweeted by Agnihotri. "Our history is linked to this place. We all haven't walked all the way from Arab to this country. We have grown up here and the specialty of that religion...and the older religions that practiced untouchability was the reason why people embraced this religion. Because this (religion) talks of peace, of equality. In the mosque, social hierarchy is not practiced. On this basis we have embraced this religion and we will not leave it." However the video is a compilation of three separate clips which have taken Kanhaiya's statements out of context from the entire speech. Jump cuts in the video can be seen at 26 and 31 seconds. The clips have been culled from a speech made by Kanhaiya in August this year at Naded where he broadly spoke about Islamophobia and the importance of education for the Muslim community in India. In the first clip Kanhaiya is not speaking about Islam as his own faith but rather loosely quoting Maulana Abul Kalam Azad.

The other two clips where Kanhaiya says, "We will save ourselves as well as our community and the country and this is our moral responsibility. Allah has a lot of power" and "Allah taala will keep us safe" are also taken out of context. Kanhaiya speaks about politicians that project themselves to be saviours of the Muslim community. It is in this context that he advises Muslims to oppose such leaders and urges them to press such candidates to speak about education and jobs.

Claim :   Video Of Kanhaiya Kumar Purporting To Show The Former Student Leader From Delhi’s Jawaharlal Nehru University Had Adopted Islam
Claimed By :  Vivek Agnihotri
Fact Check :  True
fake news featured Hinduism Islam Kanhaiya Kumar Vivek Agnihotri
If you value our work, we have an ask: Our journalists work with TruthSeekers like you to publish fact-checks, explainers, ground reports and media literacy content. Much of this work involves using investigative methods and forensic tools. Our work is resource-intensive, and we rely on our readers to fund our work. Support us so we can continue our work of decluttering the information landscape. BECOME A MEMBER
📧 Subscribe to our newsletter here. 📣You can also follow us on Twitter, Facebook, Instagram, Youtube, Linkedin and Google News 📝Stay updated with all our latest fact check stories.