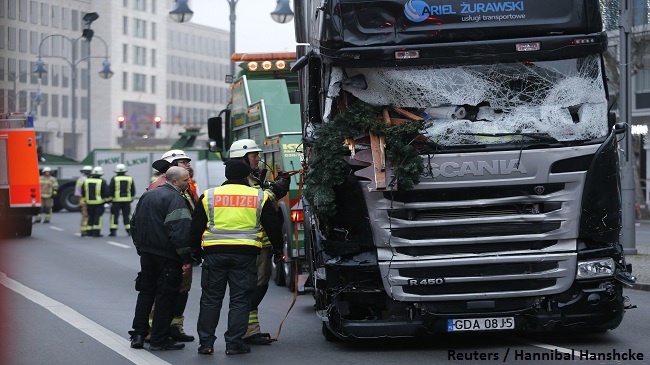 Fire fighters stand beside the truck which ploughed last night into a crowded Christmas market in the German capital Berlin, Germany, December 20, 2016.

The Christmas market truck assault in Berlin, which has left 12 dead and dozens injured, is a disturbing echo of the truck-borne attack on Bastille Day celebrants on the Nice promenade in July.

How could such events be allowed to happen? Why weren’t intelligence agencies in Germany and France able to stay one step ahead of the perpetrators?

After all, we have become used to hearing stories of “increased chatter” and “high alerts”. Doesn’t that mean intelligence agencies should know enough to prevent such attacks?

Several trends are emerging that help explain the latest phenomenon and the limits of the security and intelligence agencies. These include:

“High alerts” have become all too commonplace. Reports of “increased chatter” are either hard to discern from the background noise (which has grown exponentially in volume) or simply not heard as frequently or as clearly as before, thanks to greater security consciousness among would-be perpetrators.

In the post-Snowden era, the general awareness of security and intelligence agency monitoring has increased dramatically.

Arguably, the secret of success in the security intelligence business is keeping one’s successes secret. But now that many of the intelligence successes of the recent past are common knowledge thanks to Edward Snowden’s and other revelations, monitoring such plans and intentions has become incalculably more difficult. This has meant, for instance, that would-be terrorists and criminals have dramatically altered their online profile to evade detection.

This heightened level of awareness among would-be perpetrators of such acts has generated a far more complicated monitoring challenge.

The problem is made worse by heightened levels of disaffection.

The trend for violent extremists today is to draw inspiration from material online and through media coverage of the sensational acts of violence – be these in Brussels, Nice, Berlin, Aleppo or Mosul.

The suffering and injustices continue to mount, providing ample sources of inspiration for acts of retaliation.

So a small number of young, often marginalised and disaffected migrants or their first-generation descendants seek to lash out in part against the apparent excess and indifference of the West to their circumstances, and in part out of misplaced zeal for a religious extremist cause.

Disaggregation – the fact many would-be terrorists operate alone and not as part of a wider cell – is a key concern.

In all likelihood, there was no direct connection between the perpetrators of the Berlin and Nice attacks that intelligence agencies might otherwise have been able to monitor. Instead, those in the truck in Berlin may have drawn inspiration from the truck attack in Nice: essentially perpetrating a copycat act. This suggests the hierarchical and networked nature of terrorist groups of the past is less relevant today.

Demagogues leading extremist Islamist groups, for instance, are less directly involved in prompting and facilitating such acts. With so many ideas and instructions available online, there is little need to establish the types of direct linkages once considered the norm.

As a consequence, identifying the relatively small number of such seriously disaffected people is a massive challenge that goes beyond the traditional technology-oriented solutions favoured by security and intelligence agencies. In the social media age the task of monitoring for indicators of such behaviour has become harder as the volume of data passed over the internet has gone from an emergent flood to an overwhelming deluge.

In countries like France, Belgium and Germany, where the number of disaffected and mostly migrant youth has been growing, the challenges are stretching the security and intelligence agencies to breaking point.

The expectation is these agencies must get better at their jobs. But, in reality, there are significant limits on what can be expected from them.

What’s needed now is a new social compact that goes beyond reliance on security and intelligence agencies. We all have a role to play in preventing the fabric of society from tearing further.

The role of the security and intelligence agencies to remain vigilant and seek to monitor extremist elements will undoubtedly endure. The secret of their success will continue to be keeping their successes secret.

However, this does not absolve the rest of society from remaining engaged in community, by being inclusive, welcoming and helpful, while also maintaining a level of vigilance many had come to associate with a bygone era.