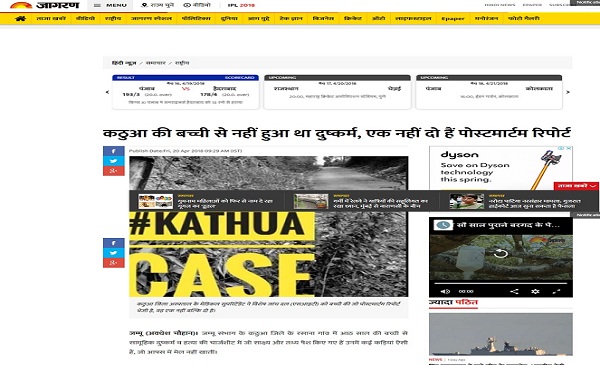 Screenshot of Dainik Jagran's story that was earlier taken down

Dainik Jagran, one of India's leading Hindi daily newspapers, has brought back the online version of its print story published Friday morning that alleged the 8-year old Kathua victim was not raped. The report had mentioned the existence of two post-mortem reports submitted by the doctors at Kathua district hospital to the special investigation team of the Jammu crime branch. The online story was taken down by Jagran.com post noon, a fact confirmed to BOOM by Kamlesh Raghuvanshi, digital editor of the publication.

The story was resurrected at 6:53 pm in the evening. BOOM contacted Raghuvanshi who said, " When I saw the story in print, I wanted to check some of the facts which the reporter sent to me. I wanted to know that if he is mentioning the post-mortem report, does he have it or did he write the details by looking at the report? When I got the reports, I looked at them and after being convinced of the details, we have brought back the online version of the story."

We asked Raghuvanshi if it would have been a good editorial practice to publish the postmortem report in the story since they took down the story from the site for more than 6 hours. He responded that the anonymous source who had provided the documents requested the reporter not to publish the same.

It is not clear why the decision to verify the details was taken only after the story was published in several print editions across the country. In its 'About Us' section, the newspaper says it has a readership of 5.59 crores.

The story had generated a lot of conversation online through the day as it talked about in detail of the contents of the two postmortem reports. While the first postmortem report talks about 6 injuries on the body of the child, the second postmortem report claims that while the hymen of the victim was found to be ruptured, it does not confirm rape, claims the Dainik Jagran report.

Earlier in the day, when BOOM tried to access the story online through a Google search, we found that the story had been deleted from the website. The story with the headline "Kathua case reveals that the girl was not raped" took us to an unrelated story headlined "ऑनलाइन है SC की वेबसाइट, क्रैश होने के बाद फैली थी हैकिंग की अफवाह".

BOOM was able to see the deleted story through Google's web cache. Click here to view an archived version of it. It is also not clear why Dainik Jagran deleted the story without informing its readers who were looking for the online version of the story after seeing screenshots of the paper version shared by social media users. The print version of the story had gone viral on WhatsApp, Facebook and Twitter and was being used to discredit the present investigation team.

Dainik Jagran's story on Friday morning disputing rape came as a huge cause of vindication for several right-wing handles on Twitter. They called this as a victory of their stance that rape was added in the chargesheet to defame the Hindu community in Jammu.

There was No Rape in #Kathua case, says both Medical reports. she was murdered somewhere else & her body was thrown in Rasana Village. Whole conspiracy to defame Hindus is exposed. pic.twitter.com/3bMG6yDUX9

Breaking! & this is Big

Both autopsy reports given by 2 diff doctors to the SIT had ruled out RAPE in the kathua murder of the little girl!

Interestingly, Avadhesh Chouhan, the reporter of the story had written another story on April 15 with the headline, "कठुआ दुष्कर्म मामला: मिटाने से भी नहीं मिटे सुबूत" . In that story, he had written that the accused cops had washed the victim's clothes which was covered in dirt and blood before sending it to Jammu Forensic Lab, in a bid to destroy the evidence. He further states that the SPO Deepak Khajuria had confessed to the crime branch that he had seen Tilak Raj, head constable at Hiranagar police station wash the victim's clothes. The forensic lab also said in its report that the washing of the clothes had resulted in the removal of the dirt and blood stains.

(This story has been updated at 8:15 pm to include details on the revival of the story by Dainik Jagran)