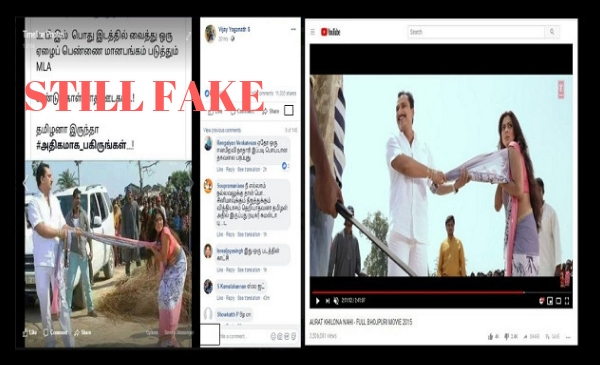 A still photo culled from a movie that was debunked in 2017 has been revived on Facebook again with a false context that claims an MLA in Uttar Pradesh was sexually harassing a poor woman in public.

The image which shows a man trying to disrobe a woman in full public view is from the 2015 Bhojpuri flim 'Aurat Khilona Nahi' (A woman is not a toy). The movie also stars Bharatiya Janata Party (BJP) MP, Manoj Tiwari.

Most recently, the photo was shared by a Facebook user with text in Tamil that said an MLA from Uttar Pradesh was harassing a woman in public but the media will not show this to you.

The photo posted on November 8, 2018 has been shared over 11,000 times. Despite many of the comments pointing out that it is fake, it has still not been deleted.

Another post in Hindi claims it shows a Dalit woman being assaulted by a BSP politician Bakruddin Ansari and his goons.

In July 2017, Vijeta Malik, a BJP Haryana State Executive member shared the same image and alleged that it was from West Bengal where Hindu women were being assaulted by Muslims in public. 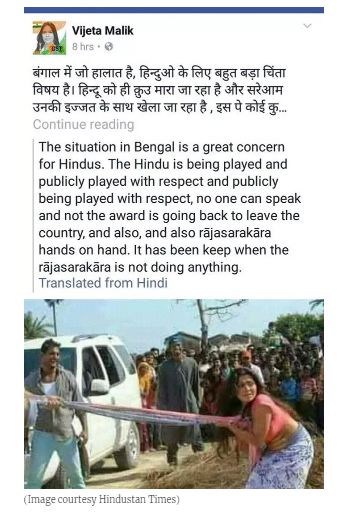 Claim Review :   Photo Of MLA From Uttar Pradesh Sexually Harassing A Poor Woman In Public
Claimed By :  Facebook User
Fact Check :  FALSE
Aurat Khilona Nahi Bhojpuri fake news featured MLA UP Uttar Pradesh
If you value our work, we have an ask: Our journalists work with TruthSeekers like you to publish fact-checks, explainers, ground reports and media literacy content. Much of this work involves using investigative methods and forensic tools. Our work is resource-intensive, and we rely on our readers to fund our work. Support us so we can continue our work of decluttering the information landscape. BECOME A MEMBER
📧 Subscribe to our newsletter here. 📣You can also follow us on Twitter, Facebook, Instagram, Youtube, Linkedin and Google News 📝Stay updated with all our latest fact check stories.