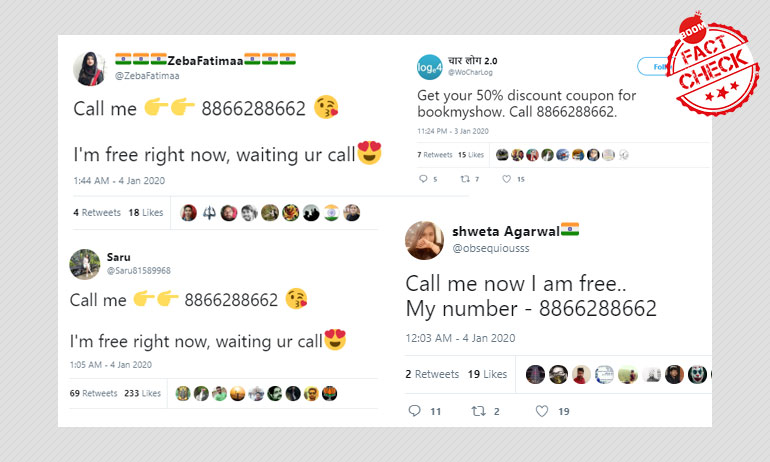 However, other Twitter users were quick to point out that the number is a toll-free number launched by the Bharatiya Janata Party (BJP), on which people can register their support in favour of pro-Citizenship Amendment Act (CAA) campaign by giving a missed call. The number was launched by the party on January 2, 2020, which was also tweeted by Home Minister Amit Shah asking people to give a missed call to show their support for the CAA.

On performing a Twitter search with the keywords, 'Call me 8866288662' we found several tweets had shared the number in the past 19 hours, most which appear to be women accounts stating that they are free to talk.

69 hot singles in your city want to have sex with you. 🔥

One of the tweets which was latter deleted, claimed that on calling the number one could avail of a 6-month free Netflix subscription.

But very soon, Netflix India dismissed the offer as fake and also gave a witty response.

This is absolutely fake. If you want free Netflix please use someone else's account like the rest of us. https://t.co/PHhwdA3sEI

The story of CAA support, in four pictures... pic.twitter.com/ueLNmqDRr8

As the tweets came under the scanner, one of the Twitter users named Shreena (@RubyOnASplurge) who had tweeted the number claimed that it was a 'prank'. The Twitter account now stands deactivated.

BOOM checked the previous tweets by the handles tweeting the number and found that they appeared to be pro-BJP. We reached out to BJP's IT cell head Amit Malviya for a response, who cut the call mid-way on hearing our query. The article will be updated upon receiving a response.

Over the last few weeks, the BJP has faced heavy criticism from opponents over the CAA Act, 2019 which was passed by the Parliament on December 11 and has since led to widespread protests across the country. The Act permits six non-Muslim religious minorities, who come to India as refugees fleeing religious persecution, expedited access to Indian citizenship. While opponents of the Act say that it is discriminatory, the government says that it is a humane piece of legislation for helpless refugees with nowhere else to go.