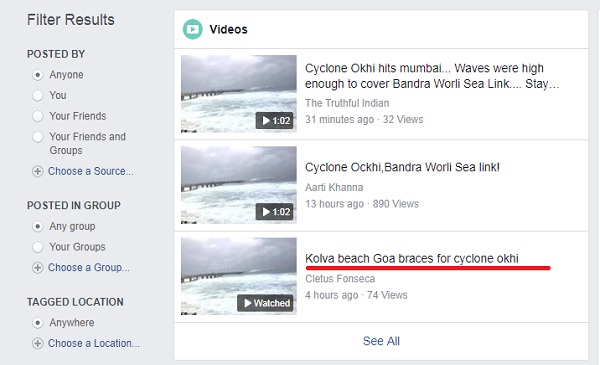 An old video of a wave engulfing a sea-bridge in Lakshadweep is going viral as Cyclone Ockhi striking Mumbai's Bandra-Worli sealink.

The video is flying across WhatsApp, Facebook and Twitter on a day when the city of Mumbai has seen unseasonal rainfall in December brought on by Ockhi.

Bizarrely it is even doing the rounds as Goa's Kolva beach.

The video shows two individuals on the bridge, one of whom starts running back after seeing the rising tide but seems to be swept away while the second person who is seated on a two-wheeler turns around and drives away quickly.

Such is the impact of the video that those sharing it have missed vital clues that could have helped identify that the video is not from Mumbai.

BOOM was able to trace the video back to YouTube where it was uploaded on August 24, 2017 with the caption of 'Minicoy Eastern Jetty, Rough Seas.'

While we cannot verify the accuracy of the above video and pin point where or when exactly this video was shot (yet) we can say for a fact that it was not shot in Mumbai on Tuesday, December 5th.

Cyclone Ockhi fake news fake video featured lakshadweep Minicoy Minicoy Eastern Jetty Mumbai old video
If you value our work, we have an ask: Our journalists work with TruthSeekers like you to publish fact-checks, explainers, ground reports and media literacy content. Much of this work involves using investigative methods and forensic tools. Our work is resource-intensive, and we rely on our readers to fund our work. Support us so we can continue our work of decluttering the information landscape. BECOME A MEMBER
📧 Subscribe to our newsletter here. 📣You can also follow us on Twitter, Facebook, Instagram, Youtube, Linkedin and Google News 📝Stay updated with all our latest fact check stories.