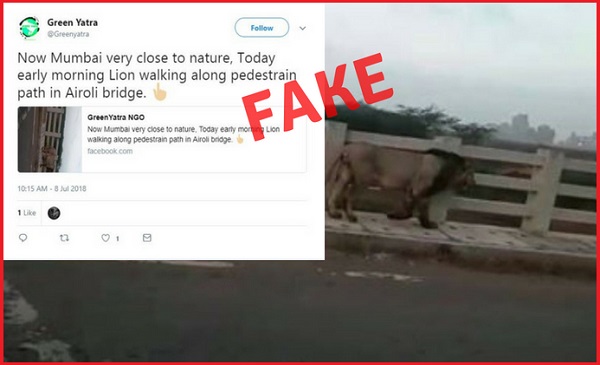 The heavy rains that lashed Mumbai this week has led to several images and videos going viral on WhatsApp and other social media platforms. But a one minute four second video shows a lion walking freely on a bridge with a text reading, "Now Mumbai very close to nature, Today early morning Lion walking along pedestrain path in Airoli bridge. "

When we looked for the video on the internet, we came across a video posted on Youtube by the Gujarati News Channel in May, 2017. The show anchor mentions that the video has gone viral and is from BMS bridge in Pipavav, Amreli. The anchor also said that the Forest Department is unaware of it and that such situations keep happening in Amreli.

We also found a news report by ABP Asmita saying the same.

This is not the first time that such an incident has taken place. Reports show that Gir region is inhabited by a large number of lions.

In August last year as well a pride of lions had entered residential area of a village in Amreli.

#WATCH: A pride of lions entered the residential area of a village in Gujarat's Amreli (Source CCTV, 15.08.17) pic.twitter.com/DTBwa69PR3

BOOM got in touch with GIR National Park to know more about the video and we will update the story once we get a reply from them.