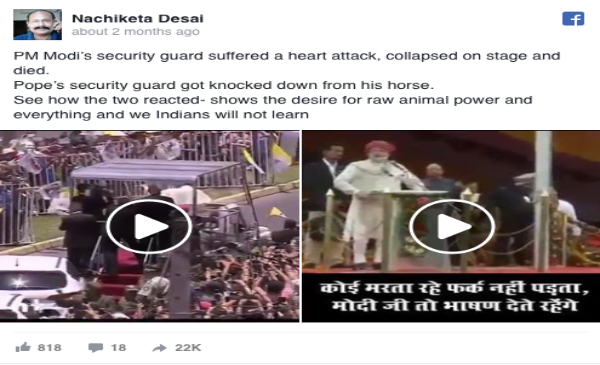 An old video from 2013 has gone viral on social media claiming that Prime Minister Narendra Modi ignored his 'security guard' who collapsed on stage and died. The post compares his attitude with another video of Pope Francis who can be seen interrupting his motorcade and rushing back to help a police officer who was thrown off her horse. The two videos shared next to each other by a Facebook user Nachiketa Desai, consulting political editor of news agency United News of India is being shared widely with the post getting over 23,000 shares at the time of writing this story. In the Narendra Modi video of around 45-seconds, a man can be seen fainting on the stage. While Modi looked back, he continued delivering his speech even as others rushed towards the man and helped him to stand on his feet. The video camera also followed the activity on the stage till the man in police uniform and his helpers went off the stage. So, when did this incident take place and did this security guard die of heart attack? We checked for the original video and found out that this incident took place on August 15, 2013 when Narendra Modi was the Chief Minister of Gujarat and not after he became the Prime Minister as claimed in the viral post. We found the clip as a part of a two hour thirty minutes speech live streamed on Narendra Modi's official You Tube page. The description says that this speech was part of the 67th Independence Day Flag Hoisting programme in Bhuj. But unlike the clip now circulating on social media, the clip on Narendra Modi’s You Tube channel is not viewable as the camera pans elsewhere as soon as the police officer collapses on stage. [video width="1334" height="750" mp4="https://www.boomlive.in/wp-content/uploads/2018/05/FOR-SWAPNESH.mp4"][/video] While checking for the original video, we also searched when was this video first shared on social media with the narrative of 'PM Modi ignoring his fainting security officer'. We found the oldest video upload on YouTube on April 10, 2014 with the text "As a security officer collapses on the stage while Modi gives a speech, he turns a blind eye to the the poor guy and continues as if nothing happened." The video has got over 3,600 views. FACT: The man who fainted on the stage was not a security officer but the state's senior most police officer and Director General of Police Amitabh Pathak. The DGP was given immediate medical treatment at the venue itself and did not die on that day as claimed in the viral message going around on social media. But in an unfortunate turn of events, Pathak died one week later while vacationing with his family in Thailand, according to a Times of India report on August 24, 2013. The report also mentions that the 58-year old "Pathak had collapsed just behind the CM, apparently because of high blood pressure and sugar levels. Doctors had later allowed him to go on the vacation on Wednesday where he suffered a massive heart attack and died after coming out of a swimming pool." On the other hand, the video of Pope Francis is from his recent visit to City of Iquique, Chile on January 18, 2018 where he was greeting the crowd from the popemobile as his motorcade drove down a coastal promenade in the city. But in a sudden and unexpected incident, a police officer's horse reared up and threw the policewoman riding the horse to the ground. The Pope who witnessed this accident halted the procession and got out of his car and went to comfort the officer. The policewoman identified as Ana Belén Aguilera Casas was not seriously injured, as reported by The New York Times.
Bhuj Chile featured Gujarat Heart Attack horse Independence Day India Narendra Modi Pope Francis Popemobile YouTube